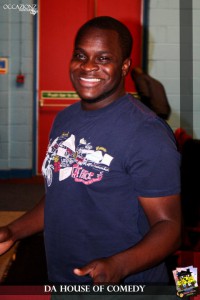 Christ the King alumnus Afolabi Dasaolu has had a rather unusual career since leaving the College in 2008.

Afolabi studied a BTEC in National Travel & Tourism and took an A-level in Media Studies during his time at Christ the King, but has chosen an altogether different career path since.

These days, you might know him better as A.DOT COMEDIAN – the comic actor and stand-up comedian currently leaving audiences in stitches all over the UK. Afolabi has come a long way since entertaining students and teachers alike at Christ the King but, as we found out, he’s not forgotten his roots.

Afolabi, or should we say A.DOT, what are you up to with your comedy at the moment?

I’m currently performing at comedy shows both in the UK & Abroad, as well as hosting private gigs such as weddings and co-operate events.

Since leaving Christ the King my career as a comedian has developed tremendously.  I have had three sold-out one-man comedy shows, and have flown abroad countless times to perform.

I’ve been blessed to have be able to perform with some of the greatest comedians from Africa and America, such as Basket Mouth and Eddie Griffin. My fan base has also increased dramatically since leaving Christ the King!

What have been the most exciting or rewarding moments of your career so far?

I have had many exciting and rewarding moments in my career so far. But if I had to mention one I’d say performing alongside the legendary comedian Eddie Griffin recently at the 02 Academy in Brixton.

What has been the greatest challenge you have faced during your career?

As a comedian, stay relevant is the greatest challenge – I constantly have to do things to keep in the public eye so my fans know that I’m still around. I have to constantly deliver fresh material at shows as well as keep my online fan base happy by releasing online comedy videos for them to enjoy.

How did your time at Christ the King Sixth Form College influence your career path?

I always use to find myself making my fellow students and teachers laugh; I used my comedic talent to bring fellow students together on a regular basis. I also hosted all the college talent and fashion shows between 2005 and 2008 which I really enjoyed.

Hosting the college events gave me good experience and helped to prepare me for my career as a comedian, and I will forever be thankful to the college for giving me the opportunity to do so. This certainly made my college experience more memorable and enjoyable.

At Christ the King I made a lot of friends who I am still in contact with to this day. I can say that I do miss being a Christ the King student – definitely one of the most enjoyable times of my life!

What are your proudest personal achievements?

My proudest personal achievements so far are graduating from the University of Hertfordshire in 2011 and seeing the huge smile on my parents face. Also seeing how far my career has developed since I left Christ the King.

What’s next for you in your career and life? Do you have any hopes and dreams you wish to achieve in the near future?

I believe that one day I will star in movies, have my own show on TV and have a comedy club where up and coming comedians can perform and try out their material.

If you could give your fellow alumni any advice for either their professional paths or general words of wisdom, what would they be?

My advice to my fellow alumni is for them to believe in their talents and dreams. To keep on chasing those dreams and to never give up on them.