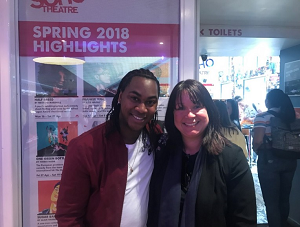 Mrs Haylock went to see a former student, Montel Douglas, at his final year showcase where he has graduated with a Degree in Drama. St Mary’s pride themselves on being a Drama School University and Montel definitely found the experience fulfilling and inspiring.

Montel says: ‘My time at CTK was the best years of my teenage life, not only did I meet great friends, the college really helped me pursue my dream in becoming an actor. I studied Drama, Performance Studies, Business Studies and Maths. Although my A-levels were a different bunch I still use skills from these subjects today. The Drama department was where I was allowed to explore my craft and I would be as confident in my ability if I didn’t have the opportunity to explore drama at that age I don’t think I would be where I am now.’

I asked Montel how Christ the King helped him prepare for university: ‘Mrs Haylock really guided me to do well in drama and performance studies, if I ever needed help I knew she was always there. This was crucial for me as I was considering studying business and accountancy at university instead of going to a drama school. But having someone believe in you from a young age made me risk it and it’s been the best decision I’ve made.’

As for studying Drama at university Montel says: ‘Initially, university was hard, I came from CTK were everyone is friendly, diverse and open but university was different. I went to a drama school called Rose Bruford College but I decided to restart at St Mary’s University where I studied BA Acting. Once I realised that being yourself is the best way for people to accept you, that’s when I started to flourish and be happy with the course I’m on.’

Now Montel has graduated things are moving fast for him. Since his Showcase he has had three agencies interested in representing him. Also Montel received his first professional theatre role at Nottingham Playhouse in a play called Shebeen. He will be dancing and joining the ensemble.

In the future, Montel wants to develop and extend his skills from his degree and plans to learn stage combat, motion capture and voice over.  Montel says finally: ‘My long term goal is to work in America so this is just the beginning of the journey but most importantly, it started at CTK.’