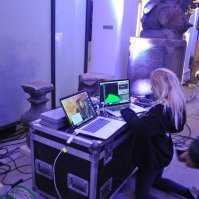 She spoke to our Alumni Team about some of the amazing experiences she has had at university, including trips abroad and working at Edinburgh Fringe, and how she credits her time at Christ the King to helping her on her journey.

“I wouldn’t have been able to pass the interview for Rose Bruford International Drama College without the music tech skills I gained during my A levels at Christ the King,” said Hope.

“I also did heavily coursework-orientated subjects at college, which helped me gain skills such as attention to detail in my work. This is a skill that has particularly given me the confidence to complete my Performance Sound degree, which is 100% coursework,” she said. “It’s been a challenge juggling the workload in all of my modules.”

Hope had several highlights to share from her time at university so far.

“I have also been able to meeting industry professionals during my course, which led to me being a sound technician at Edinburgh fringe 2016. Finally, being able to work on events in London with the Royal Academy of Music has also been a big highlight of my university experience.”

After completing her degree, Hope plans to work as a Freelance Sound Number One and a Sound Designer for theatre and live events. She also hopes to work at large events like festivals.

“It’s important to believe in your own ability, take risks and grasp at every opportunity you are offered,” she concluded.