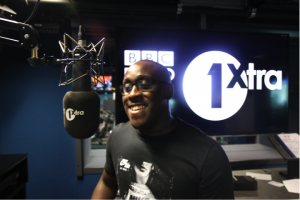 You may not know Kenny Enahoro’s name just yet, but if he’s got anything to do with it, you will in the near future.

“I see myself being a full-time presenter on commercial radio playing the music I love. Hopefully one of the big stations like Kiss 100, Capital FM or Radio 1 sees my worth soon,” Kenny told us.

It’s an ambitious plan for this former Christ the King student, but he’s well on-track to achieving his lifelong dream. Kenny’s not even finished his degree at university but has already had plenty of air time on BBC Radio 1Xtra.

“Since finishing at CTK I picked up a ‘depping’ role at BBC Radio 1Xtra which simply means I get called in to the BBC radio studios on-the-fly to present and DJ on specialist shows across the 1Xtra platform,” he said.

“Through my journey I’ve met up with some inspirational people and shared timeless experiences with industry figures.”

When he’s not on air Kenny can be found working towards his Film, Radio and Television degree at Canterbury Christchurch University. It’s a long way from his time at Christ the King, where he studied a BTEC in Sport, but Kenny says he wouldn’t be where he is today without his former college.

“I will always remember the support my tutors gave me through some challenging periods of my personal life, they really made me realise that sometimes in life you need to utilise the advice from the people you meet day in and day out.” he told us.

“I also remember a college residential I went on with my tutors Mr Francis and Mrs Martins from the sports department to Le Minueres, France. This trip was a real life changer for me as I was able to gel and mix with my classmates and go on to develop friends that later became family in my world.”

Kenny is in his final year at university so if all goes to plan we can expect to hear him across the radio waves in a matter of months. But does he have any advice for students thinking about their future?

“Never give up on a dream no matter how big or far-fetched it may seem, generally the most genuine people in this world will always recognise your passion,” he says.

“I sent over 70 emails to different radio stations and I received 70 rejections, but it’s your reaction to getting knocked off your ladder that counts. This is why I am ambitious to get to where I need to be in life.”