Sebastian T: “College allowed me to step out of my shell and meet new and amazing individuals” 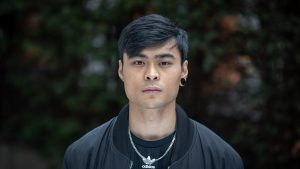 Sebastian took A levels in Media Studies, Biology and Psychology.

“My Media Studies tutor at the time, Mr Haylock, was a great teacher and I had a great time learning a range of media knowledge from him,” said Sebastian.

“College allowed me to step out of my shell and meet new and amazing individuals, from friends to teachers. Moreover, college allow me to approach different types of people and talk to them with a level of confidence.”

After graduating from Christ the King with three A levels under his belt, Sebastian progressed to higher education.

“I did a Foundation degree in Media Production and got a good grade, as well as learning that I wanted to pursue a career in video and post-production,” said Sebastian.

He then went on to study a BA in Film Production, but quickly discovered that university wasn’t for him.

Not to be discouraged, Sebastian took a different route to achieving his ambitions in film production.

“At the time I simply wanted to pursue and explore my own creative potentials when it came to video production, which made me come to the decision that I wouldn’t carry on with the course but go onto freelancing and make the videos I wanted to make,” he explained.

“After freelancing for two-three years I eventually got my first Videography and Editing job at UNILAD and after a year I am currently now working at SJR & Colloquial as a Visual Content Creator.

So what’s next for Sebastian?

“If I was to go back into education I would study courses like Psychology or Philosophy to broaden and develop a different kind of knowledge which I could then use to improve my storytelling through film,” said Sebastian. “I also plan to do freelancing full time as a solo Shooting Director or a Director of Photography for my own creative company in the near future.

“In five years time I see myself still learning and getting better at my craft and continuing to make great content, whether it’d be narrative features, short films, TV commercials or travel videos, and I also plan to take my ambitions and passion for music to the next level.”

Thanks for your time, Sebastian, we wish you all the best!

One thought on “Sebastian T: “College allowed me to step out of my shell and meet new and amazing individuals””