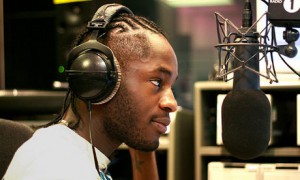 Fans of Radio 1Xtra will recognise Alec Boateng’s voice – even if they don’t recognise his name.

This DJ and former Christ the King student goes by the name of Twin B and has been the host of 1Xtra’s Breakfast Show since 2011.

Yet that’s not all that keeps Twin B busy; he’s also been heavily involved with a number of record labels in the past and has worked with the likes of Wretch 32, Gyptian and Tinie Tempah. He’s currently A&R director at Atlantic Records, using his love for music to seek out and develop new talent.

“I have got a passion for music and that’s not just outside radio and DJing, it also travels in terms of how I spend my day,” he told Flavour Mag.

Growing up in Plaistow, East London, Twin B developed his passion for music early on in life. When he bought his first vinyl – Dangerous by Busta Rhymes – he played it until it couldn’t be physically be played any more.

From there Twin B’s talents grew as he started DJing regularly and producing mix tapes, as well as appearing on local and community radio stations. His growing involvement in the music industry, not to mention his huge talent, meant it wasn’t long until 1Xtra came calling.

“I love 1Xtra! There’s no other institution around with more passion for the music it plays,” he told the BBC.

Twin B took on a number of different roles when he was brought on-board at 1Xtra and after a successful stint in the weekend breakfast slot, he replaced Trevor Nelson and Gemma Cairney on the weekday breakfast show.

Filling the shoes of a legend like Trevor Nelson is no easy task, but Twin B’s confidence and cheeky personality ensured he rose to the challenge with ease. Four years later and the show is more popular than ever, with Twin B now co-hosting with Yasmin Evans.

A mixture of chat, interviews and unique features, 1Xtra Breakfast has a focus on music not seen on many other morning radio shows. But Twin B wouldn’t have it any other way; the music and the artists are always the most important thing.

“I really do strongly believe in what we do at 1Xtra. I think there’s a real need to do the things we do there and everyone who works for 1Xtra believes in the music and what we stand for,” he told Flavour Mag.

As his work with Atlantic Records continues, and the breakfast show keeps delighting listeners every morning, we’re sure 2015 is going to be huge for Twin B.